Good morning. I’m going to speak today about the coming European Parliament elections and the Finns Party’s plans for their participation.

The Finnish Parliamentary elections last week were indeed a success for the Finns Party and we are most satisfied with the results. The Finns Party came within two-tenths of a percent of being the biggest vote-getter – which title, nevertheless, went to the Social Democratic Party.

Our representation in the Finnish Parliament grew from 17 members to 39 members. We even exceeded the number of seats we had in the 2015 election.

The ‘law of Karma’ seemed to appear as all those representatives that had abandoned the Finns Party two years ago lost their seats with rather disastrously poor vote results – and this happened in spite of help from many parts of the media that had given them exposure and glowing support.

In any case, we must now move ahead and keep the wheels turning. The European Parliament elections will be in about a month – on the 26th of May. For the sake of voter activity and participation, it would have been so much better for the Finnish and European Parliament elections to have taken place at the same time. This was not agreeable to some of the parties – so they are now being held separately. This is particularly unfortunate for Finland – and Finnish democracy – because the voter turnout for the Euro elections in Finland is only about forty percent of eligible voters. Nevertheless, European Union legislation is binding in Finland and becomes the law of Finland.

The Finns Party wants to make it clear that for those Finnish citizens who are critical of the European Union – NOT voting in the Finnish European Parliament elections is just as bad as voting FOR the European Union’s federalist policies! Moreover, when we have more voters and representatives with us and have additional opportunities to form alliances, we get more influence in the discussions and decisions that take place in Brussels.

There are trends happening in Europe – and will continue to happen – that are bringing about change. The Finns Party wants to take part in these changes! Nationalist-minded political parties in Europe are coming in from the fringes and growing into large parties and even forming governments.

It’s also becoming evident that the traditional mainstream Finnish parties have come closer to the Finns Party’s way of thinking. Whatever one’s opinion is regarding whether Finland should be an EU member or not, it is clear that the alternatives are not just a case of leaving or being part of a deeper federal state. A mindset is developing in Europe that the European Union is to be a mechanism which adds value to each member-nation and its citizenry – and not just an organization that acknowledges German and French hegemony and is a ‘money-making machine’ for Germany and France. We can optimistically predict the breakthrough of such a mindset in these coming May elections – BUT such an outcome requires those citizens who support the principle of independent nations to go out to vote!

As an election ‘policy program,’ the Finns Party must look to the goal of a decrease in European Union ‘federalism.’ Finland must cease taking the role of being the ‘model student’ – it must defend Finland’s own interests – and seek to make alliances – on a case-by-case basis – with others seeking the same goals.

The power of the European Commission must be curbed. We want to increase the decision-making possibilities of the European Council where the individual member-nations have a better chance of affecting decisions. Finland must also more energetically oppose any increase in ‘qualified majority voting (QMV)’ and actively promote the idea of more unanimous decision requirements for EU decisions. Such a strategy will assist in applying brakes to the overzealous plans for federalisation being pushed by the European Commission.

The Finns Party wants the ‘freedom of labour movement’ removed from the ‘four freedoms’ of the ‘internal market’ promoted by the EU. The implementation of this idea has caused considerable problems in the receiving countries as well as the countries of emigration. The ‘free movement of labour’ is a big reason for the present Brexit situation.

The Finns Party believes that Finland taking up the Euro was a huge political and economic mistake and has proved to be a failure – in terms of both the resulting structure and composition. Ten years ago, the Greek economic catastrophe showed that the Euro single currency could only succeed by deepening integration and instituting common responsibility among the EU members. The Finns Party does not want more ‘integration’ and the institution of common responsibility as that would only mean less influence on legislation and less determination about Finland’s own national taxation program.

The way out of the Euro dilemma is for there to be a controlled mechanism for a member-nation to withdraw from the Euro single currency.

Management of the European Union finances has received continuous serious criticism from the European Court of Auditors over the years and needs discipline and improved administration. Finland must oppose the efforts of the EU to establish ‘financial resources’ of its own by instituting various ‘EU taxes’ from member-nations. Finland must make sure that it maintains control over the Finnish budget and financial resources. It also must be noted that Finland is a net contributor to the European Union and is against any increase in membership fees using the guise of Brexit.

Efforts must be begun to realize the significant savings from dropping certain programs such as the EU’s ‘External Action Service, the Committee of the Regions, the Economic and Social Committee.’ Also to be cut are amounts of development aid, the program for the accession of Turkey to the EU and the wasteful alternation of full plenary sessions with Strasbourg.

The European Union has to put a stop to uncontrolled immigration as there is no justification for it. The immigration and asylum crises of 2015 are remembered only too well – and Europe also saw how completely helpless it was to prevent and halt the floods of migrants. While the EU itself was shown to be impotent, it was seen that individual member-nations did have the possibility to make some useful and decisive efforts.

The ‘Schengen Borders Control’ agreements must be reformed to eliminate time constraints and also to give the possibility for member-nations to decide on matters according to their own discretion. This reform is also the best way to give credibility to the Schengen agreements. If citizens begin to feel that ‘Schengen’ serves to facilitate illegal immigration and cross-border crime, these agreements will lose popularity and, ultimately, their legitimacy.

Population explosions in Africa and the Middle East and accompanying civil unrest, are assurances that the pressure to migrate to Europe will continue to increase during this century. The solution will not be the European Union’s ‘burden sharing’ proposal!

A genuine improvement must take place in the quality of development aid to Africa – including the concept of real sustainability of changes. The construction and maintenance of refugee camps must get proper resources. The magnetic attraction of social welfare benefits in Europe must be realized and curtailed. Attention and help must be directed towards getting refugees to return to departure points instead of them coming to Europe.

With regard to the European Union’s internal policies, Finland must give vigorous support and defence to its own agricultural and forestry industries – including domestic food processing and prevention of cheap food imports.

With regard to industrial consequences of climate change, the Finns Party applies the same logic in the European Parliamentary election as it does in domestic politics: ‘industrial chimneys’ are to be kept where they are producing less pollution and should not be driven to places where they produce more!

As an EU member, Finland should support and operate on using taxes on uses of coal and climate-degrading energy sources. These taxes will penalize ecologically-worse alternatives and move consumption to more climate-friendly processes – and at the same time, protect Finnish and European energy production.

Nationalist parties were already successful in the 2014 European Parliament election – more than ever before. These parties, however, were not able to take full advantage of their success as elections were very tight in many cases, and they did not want to risk their positions by being mislabelled – and misunderstood – in their own countries. But now, in 2019, many of these parties have gained support significantly – and have even participated in the formation of governments.

The Finns Party attended the April conference in Milan of several ‘nationalist-minded’ parties from other EU member-nations. These other parties were the ‘Danish People’s Party (DF),’ the ‘Alternative for Germany (AfD)’ and the ‘League (Lega)’ in Italy. The goal is to form the largest ‘nationalist’ group in the coming Parliament. Other parties with similar thinking are expected to be interested – ones already showing interest are the ‘Freedom Party of Austria (FPÖ),’ the ‘Conservative People’s Party of Estonia (EKRE),’ and the ‘We Are Family (Sme Rodina)’ of Slovakia. A larger group, of course, means greater influence potential.

These various parties have, naturally, differences among them as they have their origins in different historical, geographical and cultural experiences and heritages. The Finns Party certainly recognizes these differences but we would like to build on themes which have a common core. These include, for example, effectively opposing the development of a ‘Federal Europe’ while at the same time defending and promoting Europe’s unique cultural heritage and values as well as protecting Europe from harmful immigration. We are not EU-minded but very European-minded!

As the Finns Party chairman, Jussi Halla-aho, has said – it would have been far better for the Finnish Parliamentary elections to have been held at the same time as the European Parliament elections, but this was not acceptable to some of the Finnish political parties. The voter activity and turnout would have been far more for the European election inasmuch as the European Parliamentary elections have not resulted traditionally in satisfactory participation by Finnish citizens. Now, with the expected machinations of forming a government at the same time as preparation for the Euro elections, political agendas are full and certainly stressful. The situation presents challenges for the candidates as well: many have just had campaigns for the Finnish Parliament election.

The Finns Party is entering a full list of candidates. These candidates are exceptional – exceptionally young – the average age is 46.75 years – yet with what we think is impressive expertise. The relative youth should be expected as the Finns Party is indeed a young party. Nevertheless, we are honoured to have, of course, some well-respected ‘dinosaurs’ in the party – for example, our very own ‘workman,’ Matti Putkonen. By the way, Matti will not be a candidate – if I may now reveal that.

Of the twenty candidates seven are women and thirteen are men. All have committed themselves to work energetically for a better Finland and a better Europe. Let me give you the list now – with their names and their present occupation or activity: 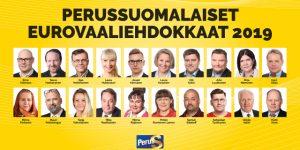 Mr. Ilpo Heltimoinen, Circulation Manager, Member of the EU Committee of the Regions 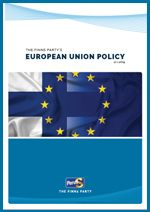 INTRODUCTION: THE FINNISH PEOPLE IN EUROPE
The backbone of the Finns Party’s role in Finnish politics is the defence of Finnish democracy, culture and way of life. That fact is the reason for the Finns Party’s critical approach to the increasing efforts of the European Union to advance political and economic integration of its members into the Union. The endurance of Finnish democracy and its valued ‘welfare society’ in the future is dependent on Finland prying itself loose from the intrusion of Brussels into all aspects of daily Finnish life. This encroachment of European ‘bureaucracy’ does not represent – or advance – the real value and virtues of European values. Read more >>

Read more about The Finns Party in english >>